Arbitration has been a frequent subject of discussion on the Cornerpoint Law blog because it comes up so frequently in business transactions, employment law, contract drafting, and litigation and disputes.

You can learn about the difference between private arbitration and a court of law in this video.

It is this attorney’s opinion that arbitration has its pros and its cons, which should be weighed on an individual basis. Why? Because there’s no switching tracks midcourse. Case in point: last year, the Washington Supreme Court confirmed that parties in arbitration must take the bad with the good. Unilaterally abandoning arbitration for a judge and court of law halfway through the arbitration is not allowed.

The plaintiff employee worked for the defendant employer. She made various claims against the employer for employment discrimination and wrongful termination.

The employee had signed an employment contract with an arbitration clause governed by federal law (called the Federal Arbitration Act (FAA)). 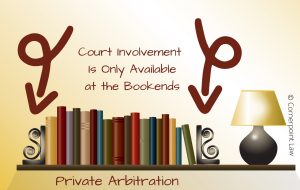 The Washington Supreme Court held that judges cannot intervene during arbitration. After all, the whole purpose of arbitration is to provide an alternative venue to court. If a party could switch tracks midcourse, there would be increased delays and expenses for all parties.

Because the parties had agreed to and started arbitration, no judge had the jurisdictional power necessary to decide if the employer breached the agreement. The parties had to continue in arbitration.

Although the outcome of the case is not surprising, it is a clear reminder from the state’s highest court that cherry picking venues is not allowed. We haven’t yet found a perfect dispute resolution system, and arbitration can be just as risky as a court of law, so it should be just as carefully considered.

Email or call me to see if Cornerpoint can help with your questions about contracts or arbitration.