All Fall Down: Business Invitee Slip and Falls

Why Washington Businesses Should Manage the Risk of Premises Liability Claims

Unless you have the grace and balance of a ballet dancer, you’ve probably tripped, slipped, or fallen at some point in your life. Where, how, and why we trip and slip matters in the eyes of tort law — individuals and businesses who own, occupy, or control property can be held legally responsible when someone is injured in a fall. So-called “slip and falls” are in the “premises liability” category of lawsuits, and, like other types of negligence claims, hinge on the reasonableness of the parties involved.

This blogpost is specifically concerned with slip and falls at commercial properties open to the public, customers, clients, and anyone else there to conduct business. Washington law calls these people “business invitees.”1

What are slip and falls?

Slips, trips, and falls are extremely common liability insurance claims, perhaps second only to automobile accidents. The Hartford insurance company analyzed its data from 2010 to 2014 and found that the most frequent type of liability claim made against a Business Owner’s Policy is for a customer slip and fall.2 Although these types of claims may not average catastrophic injuries, they can still result in serious injuries, including broken arms, legs, and hips, as well as brain injuries resulting from blows to the head. According to the 2016 Insurance Fact Book, published by the Insurance Information Institute, the 2013 national median jury verdict for a premises liability claim was $121,894, and the average was $587,000.3 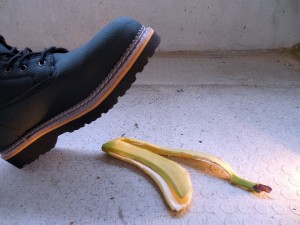 What are the defenses to slip and fall claims?

Slip and falls, with their high occurrence rates and potential for serious injuries, are among the most hotly contested types of general negligence claims. Attorneys representing businesses typically focus on two primary defenses to liability. First, objects or conditions causing trips or slips are often visible or obvious, so the business, the attorneys argue, is excused from liability. Second, the law imposes a duty on people, including business invitees, to exercise reasonable care and caution while they are walking, so the defense attorneys argue that the business invitee is fully or partially at fault for the injury.

Then why are business invitee slip and fall cases hard to get dismissed?

Thus, the effects on businesses after a slip and fall claim can be prolonged. Besides the obvious costs, even if insurance is involved, small business owners can find themselves diverting resources to answering burdensome written discovery questions, facing interruptions due to the depositions of managers and employees, and physically attending trial if the case does not settle. 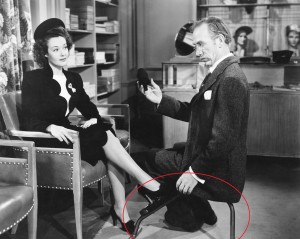 The legal concepts above may be best demonstrated by reviewing the September 2016 case of Jonson v. Sears, Roebuck & Co.4 from the Washington Court of Appeals. In that case, the plaintiff was walking through an aisle of the shoe department in Sears when she tripped and fell over a shoe ottoman – those mobile benches we can sit on while we try on shoes. The plaintiff’s attention was focused on an overhead banner. She filed suit, alleging that the shoe ottoman was a dangerous condition; Sears argued that the ottoman was not dangerous and was open and obvious. The plaintiff hired a human factors expert, who opined that the ottoman lacked color contrast, was a dangerous height, was improperly placed, and was unlikely to be detected by a shopper looking at retail displays.

Sears won in the trial court, with the judge dismissing the case. The plaintiff appealed. One appellate judge agreed with the trial court judge, opined that displays and shoe ottomans in shoe departments are common, and concluded that the fall happened because the plaintiff was not watching where she was walking. However, the other two appellate judges opined that there was evidence that the ottoman’s location and height presented a dangerous condition that Sears should have prevented. The majority concluded that there was evidence of Sear’s negligence, reversed the trial court, and reinstated the case.

What can a business do to manage the risk associated with premises liability?

Unless the Jonson case is appealed to the Washington Supreme Court, the decision means that Jonson and Sears either have to settle the case or roll the dice at trial. The case demonstrates why, if you have premises open to business invitees, it’s important that you prepare for the possibility of a slip and fall.

:idea: Make sure that you have appropriate and adequate insurance coverage for premises liability claims.

:idea: Develop written policies and procedures to prevent obstructions, conditions, and situations that might lead to a slip and fall, as well as procedures to document any incidents.

:idea: Policies and procedures are useless if they are not followed. Properly communicate your rules to employees, and make sure that they are enforced.

:idea: If you lease your premises, or give up temporary control of the premises for a special event, make sure you have an indemnification contract or provision protecting your business from liability.

Consider taking a step back to reduce the risk of a slip and fall so that your business invitees can take safe steps forward.
This blog is for informational purposes only and is not guaranteed to be correct, complete, or current. The statements on this blog are not intended to be legal advice, should not be relied upon as legal advice, and do not create an attorney-client relationship. If you have a legal question, have filed or are considering filing a lawsuit, have been sued, or have been charged with a crime, you should consult an attorney. Furthermore, statements within original blogpost articles constitute Stacia Hofmann’s opinion, and should not be construed as the opinion of any other person. Judges and other attorneys may disagree with her opinion, and laws change frequently. Neither Stacia Hofmann nor Cornerpoint Law is responsible for the content of any comments posted by visitors. Responsibility for the content of comments belongs to the commenter alone.