When Customers Access Goods on Their Own, the Risk of Liability Increases

A recent Eastern Washington case filed against Wal-Mart shows that a retailer can be liable for something as unusual as a wild animal bite. The case, involving a rattlesnake and discussed in more detail below, provides another opportunity to focus on the importance of managing the risks of “premises liability” claims. In broad terms, premises liability is a land possessor’s legal and financial responsibility for an injury on the premises. It is a type of negligence, which means it has roots in foreseeability, reasonableness, and the duty to exercise due care for the safety of others. Premises liability has many nuances and is incredibly varied. I previously wrote about how dog bites and slip and falls can lead to premises liability claims.

In this blogpost, I will be discussing a special type of premises liability in Washington, referred to by lawyers and judges as the “Pimentel Exception,” which sounds more like an indie film title or an exciting dish at a trendy restaurant than a rule of law.1 Businesses that allow customers to self-serve — access and handle goods and products without an employee’s involvement — can benefit from understanding the Pimentel Exception, and from using risk management to prevent and minimize premises liability exposure and losses.

Before we delve into the Pimentel Exception, we first need to cover the concept of notice. One way for an injured party (a “claimant” or “plaintiff”) to prove a premises liability claim is to show that the business’s employees or other representatives had actual notice — actually knew — of a dangerous condition on the premises, and did not exercise due care to warn of or fix the condition.

Actual notice sets a pretty high bar, so the law also allows an injured party to prove a premises liability claim by showing that, even absent actual knowledge, the condition existed for long enough and under such circumstances that a business’s employees could and should have reasonably discovered the condition — called constructive notice.

The lack of a business’s actual or constructive notice of a dangerous condition can potentially result in the dismissal of a premises liability claim in favor of the business. But if the plaintiff can show the Pimentel Exception applies, then, under legal order from the Washington Supreme Court, the plaintiff is allowed to proceed with his or her claim without having to prove actual or constructive notice. 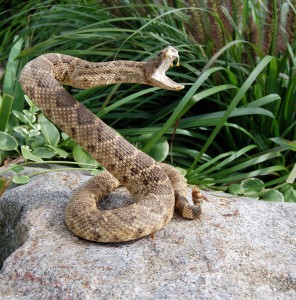 Last month, Washington’s Court of Appeals decided the case of Craig v. Wal-Mart Stores, Inc.2 The plaintiff was examining the price tag on a bag of mulch resting on a wooden pallet in an outdoor garden center when a rattlesnake bit his hand. The Wal-Mart employees working that day did not see the snake prior to the bite, and there was no evidence that any employee had ever seen a rattlesnake on the premises. Craig argued that he did not have to show Wal-Mart’s actual or constructive notice of the dangerous condition (the rattlesnake) because the Pimentel Exception applied. The Washington Court of Appeals agreed, concluding:

One of the three judges disagreed, concluding that there was no relationship between the self-service mode of Wal-Mart’s operation and the rattlesnake because there was no evidence that risks of rattlesnake encounters were greater in the garden center than elsewhere.

The case is a reminder that even rare or atypical events can lead to liability. Because the Pimentel Exception still requires that the danger be reasonably foreseeable, self-serve businesses should utilize risk management techniques and tools to identify, analyze, and treat those foreseeable conditions before they cause injuries to customers. This includes not only implementing policies and procedures for premises inspections and employee training, but also specifically guarding against potentially dangerous conditions arising out of customer interaction with products and product storage/display.

For additional context, what follows is a chart3 of several real Pimentel Exception cases decided by Washington appellate courts. The chart demonstrates that seemingly similar cases are decided differently; the distinctions are often subtle and in the details. It can be difficult to predict whether a judge will apply the Pimentel Exception in the plaintiff’s favor, underscoring why businesses should give thoughtful consideration to litigation prevention rather than waiting to battle it out in court. 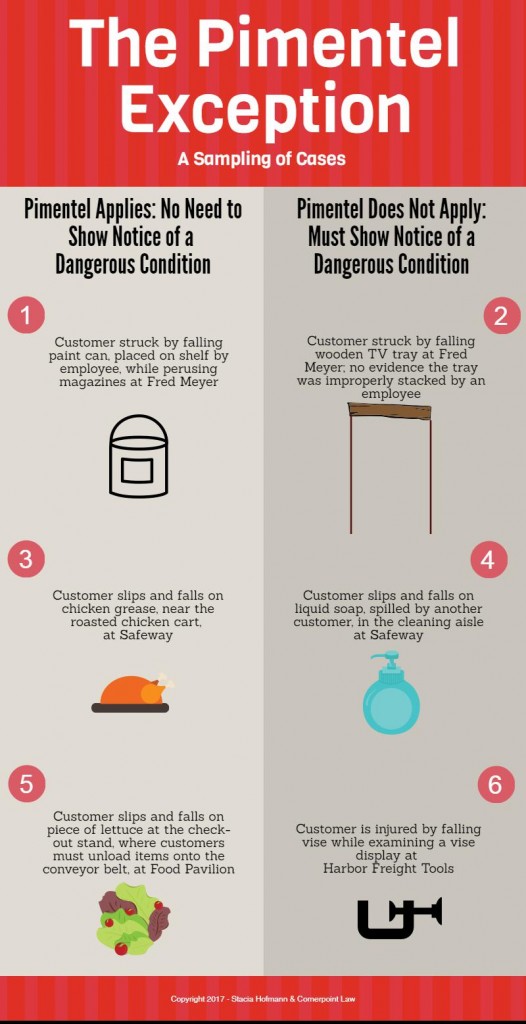